What should I write for NaNoWriMo?

I know this will sound strange, but sometimes I forget that I write books. I'm not one of those authors that diligently pulls out my laptop every day and hammers out a thousand words before breakfast. And because most of the books I've written have been short or on supertight deadlines, I can usually get them done in a month or less and then go on my merry way and not worry about writing again for awhile.

But occasionally something does happen that makes me remember. This week it was getting the interior illustrations for a board book I wrote awhile back. It looks so cute! To be honest, I'd almost forgotten all about this book in the midst of tiny house building and moving and everything else that's been going on lately.

I feel sort of bad. Like I've been neglecting my authorial duties by not devoting more time and energy to this project. But the truth is that there's a lot of waiting time when you're an author. You submit an idea weeks or months before you hear back about it and then it often takes over a year before it really becomes a book. So I guess the only difference with this book is that I haven't been sitting around twiddling my thumbs. I've been busy with other life things.

Anyway, all of this is to say that while I can't show you the interior pictures, I do have a cover I've been meaning to reveal for awhile. 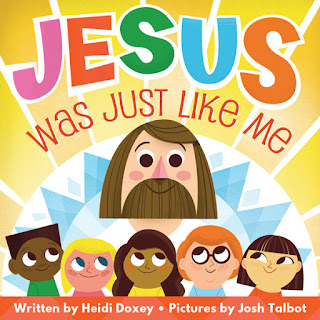 This book comes out in February and is already available for pre-order on Amazon, so if you're interested, feel free to check it out there.

And in related news, I'm pretty sure I'm going to do National Novel Writing Month again, or at least attempt it. For those who've never heard of it NaNoWriMo happens every year in November and you have to write 50,000 words in a month. I've attempted it off and on for five-ish years now, but I only won for the first time last year.

I like it as an exercise in writing discipline, which, as mentioned above, is not something I usually have. It doesn't necessarily translate into a finished product because you're writing so quickly, but it's definitely a start and it's just fun to write with lots of other people in this big group-writing event.

My problem with doing it this year is that I've been really indecisive about what to write. I have tons of ideas, but I can't seem to settle on any particular one. That's why I need your help. I'm going to list my ideas below and I would love it if you would vote here in the comments or on Facebook if you have an opinion about which one I should write for NaNo.

1. LDS romance, characters would probably be just out of college or a late 20s, set in DC, California, or maybe New York.

2. The third book in the Jane Journals series. (The second one has been done for awhile; it just needs more polishing, which I've been putting off until after I finished my tiny house.)

3. Middle-grade light fantasy about a family with five kids who find another world in the woods, set in summertime.

4. Historical/contemporary story with two plotlines, one in the past and one in the present. Both tied to a specific place. Probably early 1900s for the historical story. Not totally sure yet what would happen in either story. Most likely would involve some drama and romance. Possibly LDS.

5. Rewrite of my first novel that I never published. YA. Set in contemporary San Francisco about a school for psychics. First in a series. Or I could rewrite it to be a standalone.

6. Fairytale retelling, probably Hansel and Gretel. Maybe Cinderella. In either a completely new setting or else in a historical setting. I'm not sure. I've just always thought it would be fun to try one of these.

I may also decide to go into it with absolutely no forethought and just start typing and see what happens. That could be interesting. But I feel like that might just result in something completely unsalvageable. I don't know. I tend to use NaNoWriMo as a time to experiment with a new genre or flex my writing muscles with a point of view or a tense that I don't normally write. But maybe I want to go easy on myself this year. After all, I did just move and build a house.

Which brings me to some unrelated news: I am officially back in California and it feels so good! My house will be done this week and will be delivered to The Hideaway Ramona, which is where it will stay for at least the next six months to a year while I figure out where to put it/pay off more of the loans it took me to build it/trade my little car in for a truck that can pull my house. I'll be heading down there next weekend to make sure it's all settled in place. I'm not entirely sure when I'll be moving in and actually living tiny, but for now I'm just excited to be a tiny house owner if not a tiny house dweller (yet). 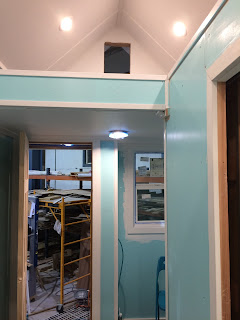 This whole process of going tiny has taken me years to execute, so I figure what's a few more months or another year in the grand scheme of things? Besides, I have some really fun plans for trips and things coming up to fill my time while I'm waiting. Now that I'm working from home I feel like I have a lot more flexibility both for traveling and for life in general, which I definitely want to take advantage of.

So stay tuned for more updates. And if you've got an opinion about what I should write or another idea you think I should consider, feel free to comment here or on Facebook. I'm looking forward to getting started on another book!
Posted by Unknown at 10:08 AM No comments:

When are you moving?

That is such a good question! And I really wish I could give you a specific answer. In fact, I'm pretty sure I care a lot more about the answer to that question than any of you do right now. But . . . I don't know for sure because the answer to the question of when I am moving is: when my house is done.

And when will that be? I don't know.

Last time I saw my tiny house it was two framed walls, not connected to a trailer. 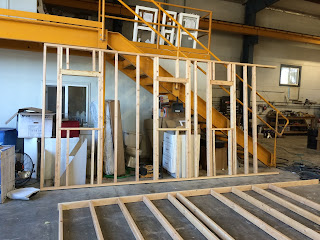 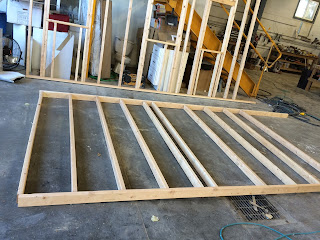 And as far as I know, it still looks like that. However, that was four days ago, so there's a possibility that my builder has made some progress since then. On the other hand, he is also working on three other houses right now. Here's some pictures of one house that's about the same size mine will be. 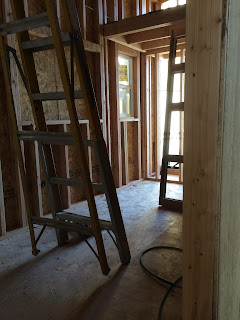 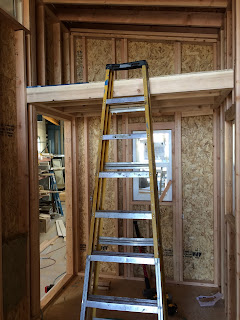 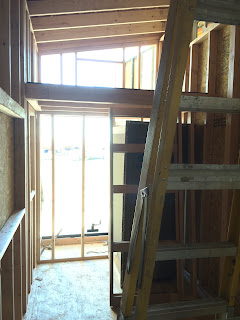 One thing that has caused a little bit of delay is that there was some trouble with the way my trailer was registered. When you buy a tiny house, you can have it registered as a travel trailer, a park model RV, or a standard utility trailer. The trailer for my house was registered as a utility trailer, which is not ideal because that makes it harder to get the right kind of insurance for my house and to park it at an RV park, should I ever want to do that, which I very well might.

So. There's that. The house in the pictures above was actually built on the trailer that mine would have been built on, if it had been registered the right way. 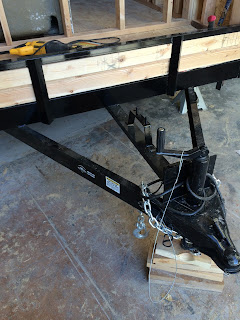 I'm trying to be as patient as possible through all this. I keep reminding myself that I have waited a whole year to make this tiny house dream happen (not to mention the four years before then when I was seriously considering it as a future possibility). So a few more weeks won't hurt anything. But on the other hand, I am so excited to get back to California that any delay at this point just feels like torture. 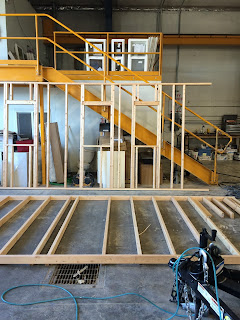 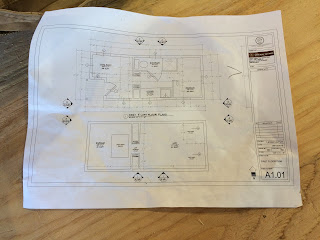 The good news is that Friday was my last day working in the office, so now I am totally ready to move from a work standpoint. I'm really excited about working full-time remote. I know there will be some challenges and things to adjust to, but I'm just so grateful to have a job with the kind of flexibility that allows me to go wherever I need to in order to live the life that I really want to live—in a tiny house, in California.

I will keep you all posted on the progress of my house, but right now it's looking like I won't be moving until the 22nd or 29th of October. And for Utah people, I'm still planning to hold a tiny open house before then, so I'll let you know when that might be happening too. Although, with everything so up in the air it'll probably be a really last-minute invite, like, "Hey! Who wants to come see my tiny house TONIGHT! For one night only!" I'm sorry in advance about that.

Another good thing that's come of me building this house (even though it's tiny and even though I'm not actually building it) is that this process has definitely taught me a few lessons in how to be flexible and patient. I generally think of myself as very easy-going and chill, but even I have my limits, and I think it's good for me to be tested on those limits every once in awhile.

It's just really hard to be patient when life is about to get a million times more awesome!!!!
Posted by Unknown at 10:24 AM No comments: